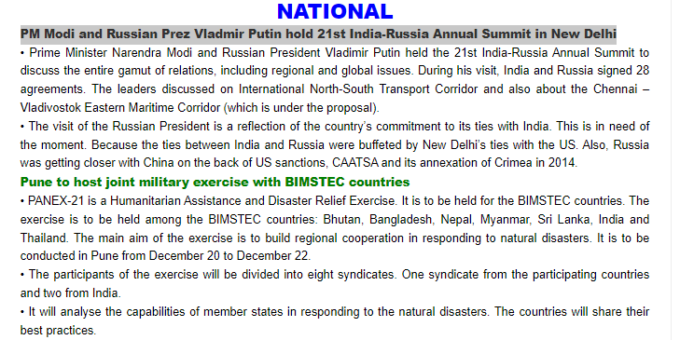 • Prime Minister Narendra Modi and Russian President Vladimir Putin held the 21st India-Russia Annual Summit to discuss the entire gamut of relations, including regional and global issues. During his visit, India and Russia signed 28 agreements. The leaders discussed on International North-South Transport Corridor and also about the Chennai – Vladivostok Eastern Maritime Corridor (which is under the proposal).

• The visit of the Russian President is a reflection of the country’s commitment to its ties with India. This is in need of the moment. Because the ties between India and Russia were buffeted by New Delhi’s ties with the US. Also, Russia was getting closer with China on the back of US sanctions, CAATSA and its annexation of Crimea in 2014.

• PANEX-21 is a Humanitarian Assistance and Disaster Relief Exercise. It is to be held for the BIMSTEC countries. The exercise is to be held among the BIMSTEC countries: Bhutan, Bangladesh, Nepal, Myanmar, Sri Lanka, India and Thailand. The main aim of the exercise is to build regional cooperation in responding to natural disasters. It is to be conducted in Pune from December 20 to December 22.

• The participants of the exercise will be divided into eight syndicates. One syndicate from the participating countries and two from India.

• It will analyse the capabilities of member states in responding to the natural disasters. The countries will share their best practices.

• National Commission for Women (NCW) has launched a pan-India capacity building programme, ‘She is a Changemaker’ for women representatives at all levels, gram panchayats to parliament members and political workers including office bearers of National/State political parties. The programme was launched by Ms Rekha Sharma, Chairperson of the National Commission for Women. To improve leadership skills of grassroots women political leaders.

• The election commission of India official statement that Sunil Arora has rich leadership experience, knowledge and skills to contribute significantly to the working of the International Institute. Sunil Arora had served as the 23rd Chief Election Commissioner of India from December 2018 to April 2021. It was under his tenure that the 2019 Lok Sabha Elections were conducted.

CDS Gen Bipin Rawat passes away in a helicopter crash

• Chief of Defence Staff (CDS) General Bipin Rawat has passed away in a helicopter crash near Coonoor in Tamil Nadu. He was among the 14 people who were on board, including his wife and staff members. Thirteen people have succumbed to the crash, including CDS Rawat, Madhulika Rawat and 11 others. An IAF Mi 17 V5 helicopter with a crew of 4 members carrying the CDS and 9 other passengers met with a tragic accident. Wing Commander Prithvi Singh Chauhan was the pilot of the Mi-17V5.

• General Rawat completed his education at St Edward School, Shimla and is an alumnus of National Defence Academy, Khadakwasla. He was commissioned in the Fifth Battalion of the Eleventh Gorkha Rifles in December 1978 from the Indian Military Academy, Dehradun, where he was also awarded the Sword of Honour.

• Academically inclined, he has written numerous articles on national security and leadership, which have been published in various journals.

• World’s oldest Test Cricketer, former English legend, Eileen Ash passed away at the age of 110. The right-arm seamer made her debut to the national side in 1937 against Australia and in a career spanning till 1949, she took 10 wickets in the seven matches she played. Her career was interrupted by the Second World War – she was seconded to MI6, the UK’s intelligence service – and retired from the sport in 1949.

• Eileen Ash was given the honour of ringing the bell at Lord’s in the Finals of the 2017 ICC Women’s World Cup where the host, England have crowned the champions after beating India in a thrilling Finals.

• The International Day of Commemoration and Dignity of the Victims of the Crime of Genocide and of the Prevention of this Crime is observed annually on December 9. The purpose of the day is to raise awareness of the Genocide Convention and its role in combating and preventing the crime of genocide, as defined in the Convention, and to commemorate and honour its victims.

• 9 December 2021 marks the International Day of Commemoration and Dignity of the Victims of the Crime of Genocide and of the Prevention of this Crime, as well as the 73rd anniversary of the 1948 Convention on the Prevention and Punishment of the Crime of Genocide (the “Genocide Convention”), the first human rights treaty adopted by the General Assembly. The Convention signifies the international community’s commitment to “never again” and provides the first international legal definition of “genocide,” widely adopted at national and international levels. It also establishes a duty for State Parties to prevent and punish the crime of genocide.

• On 31 October 2003, the General Assembly adopted the United Nations Convention against Corruption and requested that the Secretary-General designate the United Nations Office on Drugs and Crime (UNODC) as secretariat for the Convention’s Conference of States Parties (resolution 58/4). The Assembly also designated 9 December as International Anti-Corruption Day, to raise awareness of corruption and of the role of the Convention in combating and preventing it. The Convention entered into force in December 2005.

• Phookan is a Sahitya Akademi and Padma Shri awardee. Based out of Guwahati, he is a poet of renown and has written Surya Henu Nami Ahe Ei Nodiyedi, Gulapi Jamur Lagna, and Kobita. Phookan was awarded the Padma Shri in 1990 and received the Sahitya Akademi Fellowship in 2002. Phookan is the third Assamese writer to have received the Jnanpith. The previous awardees were Birendra Kumar Bhattacharya in 1979 and Mamoni Raisom Goswami in 2000.

• City Union Bank (CUB), in collaboration with National Payments Corporation of India (NPCI) and its manufacturing partner Seshaasai, has announced the launch of RuPay On-the-Go contactless wearable keychain for its debit card customers. This contactless wearable keychain will be part of their daily lifestyle and enable customers to tap and make cashless payments securely.

• This On-the-Go solution allows the bank’s customers to carry payment cards on their keychains, making for fast and convenient payments up to ₹5,000 at all Rupay-enabled point of sale devices (PoS) without entering a PIN.

• This would increase digital payment behaviour among customers, especially the younger generation and students, by enabling faster check out and less waiting in queue with features to set the spending limit, enable/disable usage through net banking, and CUB’s All-in-One mobile app.