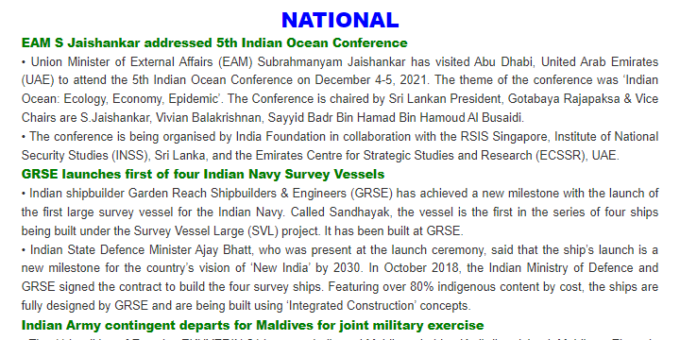 • The conference is being organised by India Foundation in collaboration with the RSIS Singapore, Institute of National Security Studies (INSS), Sri Lanka, and the Emirates Centre for Strategic Studies and Research (ECSSR), UAE.

• Indian shipbuilder Garden Reach Shipbuilders & Engineers (GRSE) has achieved a new milestone with the launch of the first large survey vessel for the Indian Navy. Called Sandhayak, the vessel is the first in the series of four ships being built under the Survey Vessel Large (SVL) project. It has been built at GRSE.

• Indian State Defence Minister Ajay Bhatt, who was present at the launch ceremony, said that the ship’s launch is a new milestone for the country’s vision of ‘New India’ by 2030. In October 2018, the Indian Ministry of Defence and GRSE signed the contract to build the four survey ships. Featuring over 80% indigenous content by cost, the ships are fully designed by GRSE and are being built using ‘Integrated Construction’ concepts.

• The 11th edition of Exercise EKUVERIN-21 between India and Maldives, held at Kadhdhoo Island, Maldives. Ekuverin means “Friends” in the Dhivehi language. It is an Indo – Aryan language. It is spoken in India, Lakshadweep and Maldives. The exercise enhances synergy and inter-operability between the Armed Forces of both nations in terms of understanding transnational terrorism both on land and at sea, conducting Counter-Terrorism and Counter-Insurgency Operations and sharing best military practices and experiences.

• Besides rigorous training, the joint military exercise will also include cultural and sports activities to enhance defence cooperation and bilateral relations. The exercise will go a long way in strengthening India’s relations with the Maldives amidst emerging security dynamics in the Indian Ocean Region. The Exercise is being conducted between India and Maldives since 2008. In 2019, the exercise was held in Pune, Maharashtra and in 2018, it was held in the Maldives.

• Mercedes driver Lewis Hamilton (Britain) won the inaugural edition of the Saudi Arabian Grand Prix (GP), by surpassing Max Verstappen (Netherlands) in the event held at the 30-kilometre (18.6-mile) coastal resort area in Jeddah, Saudi Arabia. Reema Juffali, has been appointed as an ambassador for the first edition of the Saudi Grand Prix, under the Formula 1 (F1) World Championship.

• Reema Juffali is the 1st Female F1 driver of Saudi Arabia. She is a 29-year-old driver, who has competed in the British Formula 3 championship 2021. She is the first racer to take a lap on the street circuit in Jeddah and also participate in the Williams team car display, dating back to 1979 that is sponsored by Saudi Airlines.

• Paytm, a leading digital ecosystem for consumers and merchants has partnered with Amazon Web Services (AWS) to offer Paytm Startup Toolkit with exclusive payment services to early-stage Indian startups. Paytm will help entrepreneurs to grow businesses with payment, distribution, and growth solutions who are operating in India in the AWS Activate.

• The Paytm Startup Toolkit is a single-stop platform that offers solutions in the domain of payments, payouts, banking and distribution with services including Paytm Payment Gateway, which helps businesses accept digital payments on their website, app; Paytm Payouts, which helps companies streamline their payments to employees, vendors, distributors and channel partners; and Paytm Payments Bank including nodal banking, which provides truly digital banking.

• Padma Bhushan Dr Mamballaikalathil Sarada Menon, India’s 1st woman Psychiatrist and the longest-serving head of the Institute of Mental Health has passed away. She was born in a Malayali family in Mangaluru, Karnataka. She was honoured with Padma Bhushan in 1992 for social works.

• Dr M Sarada Menon started her career as a Psychiatrist in the Institute of Mental Health (then known as Government Mental Hospital) in Kilpauk, Chennai in 1959.

• She became the 1st woman Superintendent of the Institute of Mental Health in 1961.

• The Reserve Bank of India’s (RBI) Monetary Policy Committee (MPC) headed by Reserve Bank of India (RBI) Governor Shaktikanta Das kept the repo rate unchanged at 4 per cent for the ninth consecutive time while maintaining an ‘accommodative stance’ as long as necessary. The reverse repo rate will continue to be 3.35 per cent. The central bank had last revised the policy rate on May 22, 2020, in an off-policy cycle to perk up demand by cutting the interest rate to a historic low.  The meeting was held between December (6 to 8). The remaining will take place in February (7 to 9, 2022).

• Punjab National Bank (PNB) launched the PNB Pride-CRMD module tool, an android-based application for differently-abled employees to monitor and effectively follow up with the special mention account (SMA) borrowers. The Pride-CRMD module has built-in TalkBack software that allows the visually impaired to access the system freely and to interact with customers by tapping on their phones.

• Punjab National Bank emphasized the abilities of differently-abled staff members and the utilization of their skills in the conceptualization of PNB warriors and implementation of PNB Pride.