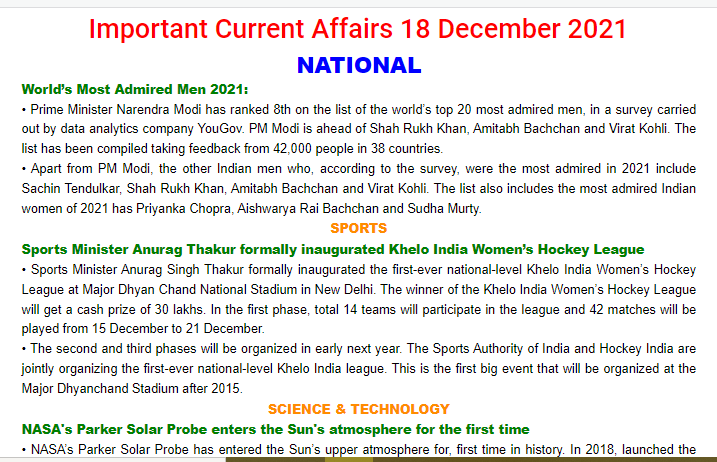 • Prime Minister Narendra Modi has ranked 8th on the list of the world’s top 20 most admired men, in a survey carried out by data analytics company YouGov. PM Modi is ahead of Shah Rukh Khan, Amitabh Bachchan and Virat Kohli. The list has been compiled taking feedback from 42,000 people in 38 countries.

• Apart from PM Modi, the other Indian men who, according to the survey, were the most admired in 2021 include Sachin Tendulkar, Shah Rukh Khan, Amitabh Bachchan and Virat Kohli. The list also includes the most admired Indian women of 2021 has Priyanka Chopra, Aishwarya Rai Bachchan and Sudha Murty.

• Sports Minister Anurag Singh Thakur formally inaugurated the first-ever national-level Khelo India Women’s Hockey League at Major Dhyan Chand National Stadium in New Delhi. The winner of the Khelo India Women’s Hockey League will get a cash prize of 30 lakhs. In the first phase, total 14 teams will participate in the league and 42 matches will be played from 15 December to 21 December.

• The second and third phases will be organized in early next year. The Sports Authority of India and Hockey India are jointly organizing the first-ever national-level Khelo India league. This is the first big event that will be organized at the Major Dhyanchand Stadium after 2015.

• The new milestone marks one major step for Parker Solar Probe and one giant leap for solar science. Just as landing on the Moon allowed scientists to understand how it was formed, touching the very stuff the Sun is made of will help scientists uncover critical information about our closest star and its influence on the solar system.

• Army Chief General M.M. Naravane has assumed the charge as the chairman of the Chiefs of Staff Committee that comprises the three service chiefs. The post fell vacant following the death of Chief of Defence Staff General Bipin Rawat in the Indian Air Force helicopter crash on December 8. General Naravane has been given the charge, as he is the senior-most among the three service chiefs.

• IAF Air Chief Marshal V.R. Chaudhari and Navy Chief Admiral R. Hari Kumar had taken over their respective positions on September 30 and November 30. Before the creation of the post of the Chief of Defence Staff, the senior-most among the three service chiefs used to be the chairman of the Chiefs of Staff Committee.

• India’s TVS Motor Company will develop electric vehicles (EV) with BMW’s motorcycle brand in India, joining a host of Indian automakers that have sought to expand their clean mobility offering. The tie-up comes at a time when new-age start-ups like Ola Electric & Ather are ramping up investment in electric scooters.

• Under the extended scope of the partnership, the companies plan to come up with an electric vehicle platform in addition to the existing internal combustion platform for both global and domestic markets. The first product under the enhanced co-operation, an electric model suited for the urban ecosystem, is expected to make its debut in the next 24 months.

• World Arabic Language Day is observed globally on 18th December every year. The Arabic language is one of the pillars of the cultural diversity of mankind. It is one of the most widely used languages in the world, spoken daily by more than 400 million people. The purpose of this day is to raise awareness of the history, culture and development of the language by preparing a program of special activities and events.

• The theme of this year’s World Arabic Language Day is “The Arabic Language and Civilizational Communication”, and it is considered as a call to reaffirm the important role that the Arabic language plays in building bridges of connection between people on the rise of culture, science, literature and many other fields.

• Every year, December 18 is observed as the Minorities Rights Day to uphold the right to freedom and equal opportunities for the ethnic minorities in India and create awareness about the respect and dignity of the minorities. India has faced many obstacles since the British Rule regarding basic human rights. However, these rights were safeguarded after the independence and people must be made aware of it. Thus we celebrate Minorities Rights Day on 18th December every year.

• The Minority Rights Day 2021 aims to uplift all the minority sections of society and back them to voice their opinion. Considering the COVID-19 pandemic, all the sessions, seminars, and debates are likely to take place digitally.

• The International Migrants Day is observed globally on 18 December every year. The day is marked by the United Nations, through the UN-related agency International Organization for Migration (IOM). The day is observed to highlight the contributions made by the  272 million migrants, which includes more than 41 million people who are internally displaced persons, and the challenges they face.

• The theme of International Migrants Day 2021 is Harnessing the potential of human mobility.

• On 18 December 1990, the General Assembly acquired a resolution on the International Convention on the Protection of the Rights of All Migrant Workers and Members of Their Families, to recognize the contributions made by millions of migrants to the economies of their host and home countries promotes respect for their basic human rights. The day was firstly observed in 1990.

• Lewis Hamilton has picked up a new title only days after losing one on the track. The seven-time Formula One champion received a knighthood at Windsor Castle, London. Hamilton gets the honorary title of “Sir” after being knighted by the Prince of Wales for services to motorsports. Three other F1 drivers have been knighted: Jack Brabham, Stirling Moss and Jackie Stewart. Hamilton is the first to be awarded while still competing in the sport.

• WhatsApp announced the Digital Payments Utsav – a pilot program that is going to adopt 500 villages in Karnataka and Maharashtra in an effort to “accelerate financial inclusion”.

• Digital Payments Utsav took off on October 15 this year in the Kyathanahalli village in the Mandya district of Karnataka.

• Here on-ground facilitators helped familiarise villagers with various aspects of digital payments including how to sign up for UPI, set up a UPI account, and also told them about the best practices to be safe while using digital payments online.