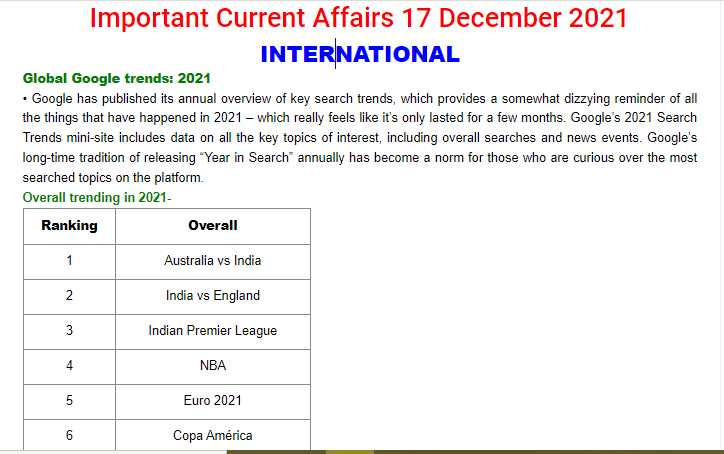 • Google has published its annual overview of key search trends, which provides a somewhat dizzying reminder of all the things that have happened in 2021 – which really feels like it’s only lasted for a few months. Google’s 2021 Search Trends mini-site includes data on all the key topics of interest, including overall searches and news events. Google’s long-time tradition of releasing “Year in Search” annually has become a norm for those who are curious over the most searched topics on the platform.

• In July 2017, Khadi and Village Industries Commission (KVIC) signed an agreement with Arvind mills Limited, Ahmadabad, to trade Khadi Denim products around the world. Since then, Arvind Mills has been purchasing a large quantity of Khadi Denim fabric every year from KVIC-certified Khadi institutions of Gujarat.

• UNESCO has added Durga Puja in Kolkata to its 2021 list of Intangible Cultural Heritage, giving international recognition to the biggest religious festival of the 331-year-old city and the state of West Bengal. The UNESCO’s announcement was welcomed by Bengal’s ruling Trinamool Congress (TMC) as chief minister Mamata Banerjee is widely recognized as the biggest patron of the festival.

• With the inclusion of Durga Puja, the number of elements in the list of Intangible Cultural Heritage from India has increased to 14. As many as 36,946 community Durga Pujas are organised in Bengal. Of these, around 2,500 are held in Kolkata. In recent years, several organisations had urged UNESCO to recognise the festival.

• Union Minister of State (Independent Charge) Science & Technology, Dr Jitendra Singh inaugurated the seventh edition of the India International Science Festival at Panaji, Goa. The theme of the 4-day science festival is ‘Azadi Ka Amrit Mahotsav’ – “Celebrating Creativity, Science, Technology and Innovation for a prosperous India”. First India International Science Festival was held in 2015 at IIT Delhi. The main aim of the Science Festival is to bring into use the innovations by the people and develop technology that is affordable to the masses.

• The Food and Agriculture Organisation (FAO) of the United Nations has signed an agreement with the Andhra Pradesh Government to train the farmers in good farm management practices and sustainable agricultural methods. The FAO apart, the Indian Council of Agricultural Research is collaborating on the project.

• FAO will provide training to farmers, Rythu Bharosa Kendram (RBK) staff, officials, and scientists on new technologies in agricultural allied sectors and training to farmers on best cultivation management practices. In 2020, Rythu Bharosa Kendram (RBK) or farmer support centres were set up in AP as part of an effort to weed away fake seeds, pesticides and fertilisers from the markets.

• International Tea Day is observed every year on December 15 in countries like Bangladesh, Sri Lanka, Nepal, Vietnam, Indonesia, Kenya, Malawi, Malaysia, Uganda, India, and Tanzania. It is the second most used drink in the world after water. For some people, tea is an integral part of life which adds rhythm. China is currently the largest exporter of tea. According to a study conducted by the Tea Board of India in 2007, around 80 per cent of the total tea produced in India is consumed by the domestic population.

• The first ITD was held in New Delhi in India in 2005. However, in 2015, the Indian government proposed to the UN Food and Agriculture Organisation to expand International Tea Day across the world.

• The reason for the UN celebrating May 21 as International Tea Day is that the season of tea production begins in May in most of the tea-producing countries.

• The Asian Development Bank (ADB) has approved a $112 million loan to strengthen skills education and training through the establishment of the Assam Skill University (ASU). The Loan will create a path for skill development to enhance the productivity and competitiveness of Assam’s economy and industries. An additional $1 million grant from the Japan Fund for Poverty Reduction will support the introduction of technologies for smart campus management, integrated teaching, learning, and career development management.

• The project will help develop the ASU’s management and operating systems, business models, and faculty and staff, and support the design and construction of environmentally sustainable and climate-resilient university campus and facilities to ensure efficient and sustainable operations.

• Paytm, which got listed in bourses last month, has announced the launch of Paytm Wealth Academy, a tech-powered educational platform. The launch of the wealth academy is initially on the Paytm Money app, the wealth management app owned by Paytm’s wholly-owned subsidiary Paytm Money. Paytm Wealth Academy will initially be available to select users, followed by a complete rollout.

• The Paytm Wealth Academy will allow users to learn trading and financial concepts at their own pace at their level of comfort. The platform offers a wide catalogue of courses and webinars along with personalized recommendations for users, curated to complement their existing knowledge.

• Paytm Wealth Academy is an educational platform designed to make financial learning intuitive and self-driven. For the first time, highly customizable courses are being offered, allowing users to start their learning journey from any stage. This will allow new traders to establish a ground-up understanding of financial concepts and also encourage experienced traders to stay updated with advanced trading strategies.

Wholesale inflation surges to 14.23% in November, highest in the current series

• Producers’ inflation based on the Wholesale Price Index (WPI) has reached an all-time high in the current series at 14.23 per cent in November. This is the eighth successive month of double digits WPI (mainly due to the hardening of prices of mineral oils, basic metals, crude petroleum and natural gas). Wholesale Price-based Index (WPI) inflation base year is 2011-12. Also, the spike is highest since April 2005.

Lucent GK In Hindi
2019-12-25  •  0 Comments
Indian Geography In Hindi Hello friends, Today we are sharing a very important and easy PDF of  Lucent GK In...