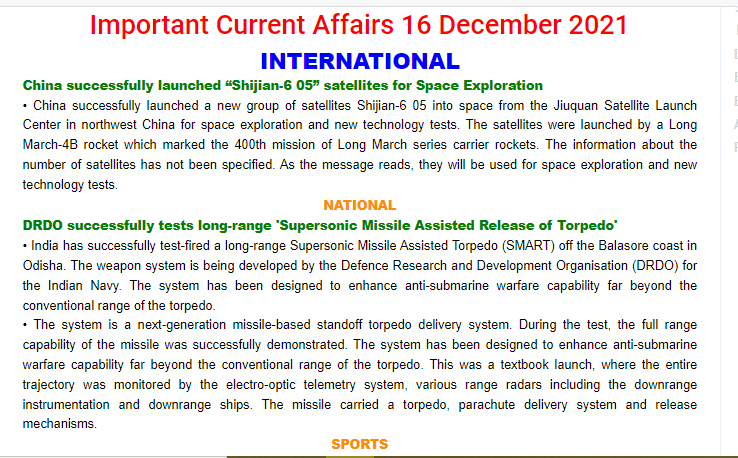 • China successfully launched a new group of satellites Shijian-6 05 into space from the Jiuquan Satellite Launch Center in northwest China for space exploration and new technology tests. The satellites were launched by a Long March-4B rocket which marked the 400th mission of Long March series carrier rockets. The information about the number of satellites has not been specified. As the message reads, they will be used for space exploration and new technology tests.

• India has successfully test-fired a long-range Supersonic Missile Assisted Torpedo (SMART) off the Balasore coast in Odisha. The weapon system is being developed by the Defence Research and Development Organisation (DRDO) for the Indian Navy. The system has been designed to enhance anti-submarine warfare capability far beyond the conventional range of the torpedo.

• The system is a next-generation missile-based standoff torpedo delivery system. During the test, the full range capability of the missile was successfully demonstrated. The system has been designed to enhance anti-submarine warfare capability far beyond the conventional range of the torpedo. This was a textbook launch, where the entire trajectory was monitored by the electro-optic telemetry system, various range radars including the downrange instrumentation and downrange ships. The missile carried a torpedo, parachute delivery system and release mechanisms.

• Australia opener David Warner and West Indies all-rounder Hayley Matthews have been voted the ICC Players of the Month for November. Warner, nominated for the ICC Men’s Player of the Month award alongside Pakistan’s Abid Ali and New Zealand’s Tim Southee, emerged victorious with the most votes, following his crucial role in Australia’s triumph in the ICC Men’s T20 World Cup 2021.

• Australian opener David Warner has bagged the ICC Player Of The Month for November. The southpaw has been in scintillating form in recent times. He was the Player of the Tournament as Australia won their maiden T20 World Cup title. He then started the Ashes series with a bang by scoring 94 in the first Test at The Gabba.

• West Indies all-rounder Hayley Matthews secured the Women’s Player of the Month award. David Warner scored 289 runs in seven matches in the tournament at a strike rate of 146.70, out of which 209 runs came from four games in November. He scored 89 against West Indies in a Super 12 game against the West Indies which was his highest score of the tournament.

BCCI formed a committee for the differently abled cricketers

• The International Boxing Association has changed its acronym from AIBA to IBA, promising to adopt a set of governance reforms so as to keep the sport’s inclusion at the 2028 Olympics. Boxing, weightlifting and modern pentathlon were all left off the initial list of sports for the 2028 Los Angeles Games and were asked to make changes by the International Olympic Committee.

• Bharat Petroleum Corporation Limited (BPCL) has tied up with Bhabha Atomic Research Centre (BARC) to scale-up Alkaline Electrolyze technology for Green Hydrogen production. This is a first of its kind initiative to support India’s commitment to achieve renewable energy targets and reduce greenhouse gas emissions. Electrolyser plants are presently imported and the collaboration is to “scale-up Alkaline Electrolyser technology for Green Hydrogen production”.

• India has set a target to reach net zero emissions by 2070 and towards that objective it is looking to raise the share of renewables in its energy mix to 50 per cent by 2030 from 38 per cent currently. This is a first of its kind initiative to support the country’s commitment to achieve renewable energy targets and reduce greenhouse gas emissions.”

• Group Captain Varun Singh, who was rescued after the helicopter crash that killed Chief of Defence Staff General Bipin Rawat and 12 others, has passed away. He was being treated for severe burns at a Bengaluru military hospital after he was moved from Wellington in Tamil Nadu’s Coonoor. His condition in the last few days continued to be “critical but stable”.

• In August this year, Group Captain Varun Singh was conferred the Shaurya Chakra for averting a possible mid-air accident after his Tejas light combat aircraft developed a major technical snag last year.  Hailing from Uttar Pradesh’s Deoria, Singh’s father KP Singh retired from the Indian Army as colonel whereas his brother Lieutenant Commander Tanuj Singh is an officer in the Indian Navy.

• In India, Vijay Diwas (also called Victory Day) is celebrated every year on December 16. The country is celebrating the 50th Vijay Diwas in 2021. Vijay Diwas is observed to commemorate the service, valour, and sacrifices of the gallant men of the Indian Armed Forces’ victory over Pakistan in the 1971 war. On this day, we pay homage to all the soldiers who had defended the nation in the war.

• The Indo-Pakistan war of 1971 which began on December 3 lasted for 13 days and officially ended on December 16, after which Pakistan surrendered to India. It was on this day in 1971, the chief of the Pakistani forces, General AA Khan Niazi, along with 93 thousand troops, had surrendered unconditionally to the allied forces consisting of the Indian Army and Mukti Bahini. The end of the war also resulted in the subsequent secession of East Pakistan into Bangladesh.

• Depending on the policy term, the minimum age to enter ranges from 90 days to 8 years.

• Depending on the policy term, the maximum age at the entrance can range from 35 to 55 years old.

• Bank of Baroda (BoB) has launched a solution for digital banking payments, named bob World Wave. Wearable technology is witnessing the rise of tremendous interest across the world and lenders are using this opportunity to adopt the more convenient and cashless digital payments systems. This is an innovative solution, intended to perfectly deliver preventive health actions as well as easier payment transactions.

• Bank’s on the go wearable payment solution, bob World Wave is designed to ensure convenient and seamless digital payments by our customers. It is anticipated that 10% of the small ticket payments will be made via wearable devices in the next two years.”