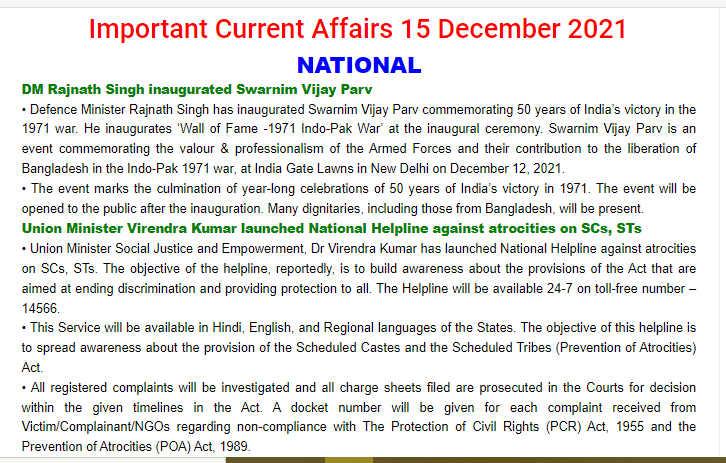 • Defence Minister Rajnath Singh has inaugurated Swarnim Vijay Parv commemorating 50 years of India’s victory in the 1971 war. He inaugurates ‘Wall of Fame -1971 Indo-Pak War’ at the inaugural ceremony. Swarnim Vijay Parv is an event commemorating the valour & professionalism of the Armed Forces and their contribution to the liberation of Bangladesh in the Indo-Pak 1971 war, at India Gate Lawns in New Delhi on December 12, 2021.

• The event marks the culmination of year-long celebrations of 50 years of India’s victory in 1971. The event will be opened to the public after the inauguration. Many dignitaries, including those from Bangladesh, will be present.

• Union Minister Social Justice and Empowerment, Dr Virendra Kumar has launched National Helpline against atrocities on SCs, STs. The objective of the helpline, reportedly, is to build awareness about the provisions of the Act that are aimed at ending discrimination and providing protection to all. The Helpline will be available 24-7 on toll-free number – 14566.

• This Service will be available in Hindi, English, and Regional languages of the States. The objective of this helpline is to spread awareness about the provision of the Scheduled Castes and the Scheduled Tribes (Prevention of Atrocities) Act.

• All registered complaints will be investigated and all charge sheets filed are prosecuted in the Courts for decision within the given timelines in the Act. A docket number will be given for each complaint received from Victim/Complainant/NGOs regarding non-compliance with The Protection of Civil Rights (PCR) Act, 1955 and the Prevention of Atrocities (POA) Act, 1989.

• Addressing the youths and farmers present at the “Drone Mela” in Gwalior, MP Chief Minister said that Madhya Pradesh will be made a leading state by using drone technology. Mr Scindia said that five Drone Schools will be opened in Gwalior, Bhopal, Indore, Jabalpur and Satna in Madhya Pradesh.

• The Geographical Indications Registry (GIR) under the Central Ministry of Commerce has accepted the petition to rename Bihar Makhana as Mithila Makhana and has also suggested further changes to the brand logo to better reflect its origins. It also suggested amendments in the brand logo to highlight its origins and protect the product’s Geographical Indications (GI) rights.

• The Sabour based Bihar Agriculture University (BAU) initiated an application on behalf of the Mithilanchal Makhana Utpadak Sangh (MMUS) to name their produce as Mithila Makhana for the welfare of fox nut growers in the Mithila region.

• The government had launched ABRY to incentivize employment generation in Employees’ Provident Fund Organisation (EPFO) registered establishments during C-19 for a period from October 1, 2020, to March 31, 2022. This scheme, being implemented through the Employees Provident Fund Organisation (EPFO), reduces the financial burden of the employers of various sectors/industries and encourages them to hire more workers.

• The project has been completed at a cost of over Rs 9,800 crore, out of which more than Rs 4,600 crore was provisioned in the last four years.

• The project will cater to the problem of water shortage mainly in eastern UP/ Purvanchal with assured water for irrigation.

• The idea behind the project is to ensure that all heritage structures get preserved.

• A total of 23 buildings will be inaugurated in phase 1 of the project.

• A first-generation immigrant, Raghavan was born in India, raised in Seattle and graduated from Stanford University. He is the editor of the book ‘West Wingers: Stories from the Dream Chasers, Change Makers, and Hope Creators Inside the Obama White House’.

• American gothic-fiction writer Anne Rice, best known for The Vampire Chronicles novel series, passed away. Anne Rice’s debut novel, published in 1976, Interview with the Vampire revolves around a vampire named Louis de Pointe du Lac, who narrates the story of his life to a reporter. Her other works: Pandora, Violin, Christ the Lord: Out of Egypt, The Witching Hour etc.

Book “Watershed : How We Destroyed India’s Water And How We Can Save It” authored by Mriduala Ramesh

• Mriduala Ramesh, the founder of Sundaram Climate Institute, which works on water and waste solutions and the angel investor in cleantech start-ups, has authored a new book titled “Watershed: How We Destroyed India’s Water And How We Can Save It”. Mriduala Ramesh is the author of “The Climate Solution” and she writes regularly on climate issues. She is also a member of the board of trustees of World Wildlife Fund (WWF), India, and chairperson of the board of governors at the National Institute of Technology, Andhra Pradesh (AP).